Indonesia is the largest archipelagic country in the world and the fourth most populous, with over 270 million people. The country has experienced rapid population growth across many of its inhabited islands, particularly in its urban centers—of which over half are located in coastal areas. By 2025, 68 percent of the country’s population is expected to live in urban areas, where it is estimated that only about half of generated waste is collected—the rest openly dumped or burned, with significant negative consequences for human health and the environment.

Across the islands, cultures, languages, and urban landscapes vary greatly, as do solid waste management systems and their levels of efficiency—challenging them to keep pace with continued growth and advance in ways that can curb ocean pollution and waste-linked greenhouse gas emissions.

At the national level, Clean Cities, Blue Ocean is supporting Indonesia to reduce land-based sources of ocean plastic pollution through its national Solid Waste Management Platform. As part of this work, the program is also engaging in sites throughout Indonesia to pilot solutions to stop the flow of plastic pollution, including: 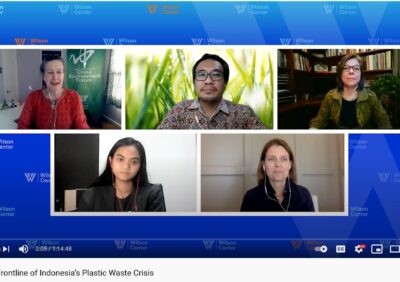