Each day, Peru generates more than 20,000 tons of waste—about 0.58 kilograms of waste per capita. While these volumes are comparatively low, inadequate waste management and infrastructure have amplified the impacts of Peru’s waste, allowing it to leak into the environment and generate other human, economic, and climate impacts. With only 64 sanitary landfills throughout the country, inconsistent collection practices, and low recycling rates, urban, coastal, and in-land desert landscapes have become inundated with waste.

Across Peru, infrastructure and support available for solid waste management varies widely. To establish more consistent practices and mitigate ongoing impacts from the country’s waste, Peru has made great progress in developing national laws for solid waste management, including its General Law of Solid Waste passed in 2000, and more recent laws to protect the environment and human health, prioritize circular economies and the recovery and recycling of waste, and promote shared producer responsibility. Local governments are, however, challenged to implement the laws effectively, often faced by shortfalls in tax revenue and municipal capacity. USAID’s Clean Cities, Blue Ocean (CCBO) program is piloting solutions to address these challenges and avert irreversible damage to our oceans, reduce plastic and waste-linked contributions to the climate crisis, and advance other priority development objectives.

In Peru, Clean Cities, Blue Ocean is piloting solutions to stop the flow of plastic pollution to the waters within and surrounding the country, including the Pacific Ocean and other inland bodies of water, such as the Piura River—which flows all the way from the Andes to the Pacific Ocean—through work in: 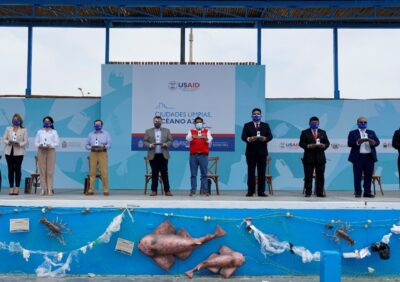